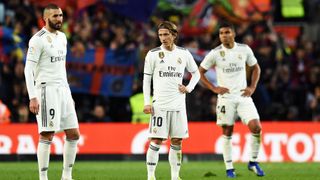 Casemiro described Real Madrid's performance in their 5-1 Clasico thumping at the hands of Barcelona as "disastrous" but insisted Julen Lopetegui is not to blame.

Luis Suarez hit a hat-trick as Lopetegui's dismal Madrid reign appeared to near its end after Los Blancos were dismantled in his 14th game in charge.

Lopetegui is likely to pay with his job, but Brazilian Casemiro is adamant that Madrid's underperforming players are to blame for such a humiliating reverse, not the under-fire coach.

"Every single one of us has been disastrous tonight," he said.

"We didn't give the best image of ourselves. It's happened too often this season. We didn't play well enough. We can't blame the manager. The players are fighting for everything on the pitch, but the result is different.

"The players on the pitch have the responsibility to run harder, fight harder. You have to give the maximum at this club. We are not having a very good season.

"We have to be calm. We know we are not playing at our best level. It's going to be a tough season.