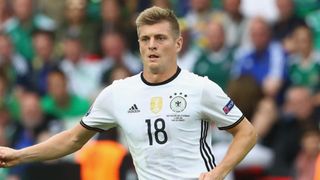 It was November 18, 2015 when then Castilla boss Zinedine Zidane described Toni Kroos as "perfect for Real Madrid".

Kroos was in his second season at the Santiago Bernabeu after joining from Bayern Munich – reportedly against the wishes of Bayern boss Pep Guardiola – and starting to put his stamp on the team.

Zidane added: "Kroos has changed his game since he got here. Spanish style is about beauty, especially here at Real Madrid. But he immediately adapted to this style."

The Frenchman, who became Madrid boss two months later, was right to a certain extent; Kroos had changed his style but it was a change forced upon him.

A more offensive midfielder at Bayern, Kroos had been shunted into a defensive role at Madrid with Zidane's predecessor Rafael Benitez, and Carlo Ancelotti before him, having to find a way to shoehorn as many stellar names into his starting XI as possible.

A week after Zidane's praise, Barcelona rocked up at the Bernabeu and ruthlessly exposed the folly of Madrid's philosophy, winning 4-0, despite Lionel Messi starting on the bench on his comeback from injury. Kroos and midfield partner Luka Modric, another playmaker rather than play-breaker, were completely overrun.

The knives were quickly out in the Spanish capital; Kroos was dropped for Madrid's next significant test – a 1-0 defeat at Villarreal – with the more athletic Casemiro stepping in.

The theory was Kroos was too immobile to play a defensive role in a game in which Madrid could not dominate possession. The elegant 26-year-old was a luxury Madrid could not afford when it really mattered.

The Barca defeat was the beginning of the end for Benitez with Zidane stepping in.

Not wanting to dispense with Kroos, Zidane ditched the 4-2-3-1 formation for his preferred 4-3-3 with the Germany international given licence to probe alongside Modric with Casemiro providing the mobility and defensive qualities lacking previously.

The results justified the change; Madrid winning 17 of 20 La Liga games to almost snatch the title away from Barca before clinching their 11th Champions League crown.

Was Kroos' change in position solely responsible for this? Of course not but it benefited the side two-fold. Firstly it gave Madrid better ball retention higher up the pitch – there are few better in that regard than Kroos and Croatian master Modric.

And secondly, and most importantly, it gave the team balance and a defensive shield.

It is to be hoped Germany boss Joachim Low was watching as his side, for perhaps the first time in the tournament, will need a shield against France in Thursday's Euro 2016 semi-final.

In the group games against Ukraine, Poland and Northern Ireland, Low's men dominated possession, as they did against Slovakia in the round of 16.

Even in the penalty shootout victory over Italy in Bordeaux on Saturday, Germany were rarely threatened in open play until Jerome Boateng's inexplicable handball allowed Leonardo Bonucci to equalise from the spot.

Kroos, operating in a defensive midfield role, was able to dictate the play with ease, strolling around the field in his typically graceful manner, taking the ball off the centre-halves and picking a pass.

Against France, the dynamic will be completely different.

The hosts will be roared on by an expectant country fully behind Les Bleus' bid to repeat their 1998 World Cup success on home soil and nowhere will the passion be greater than at Marseille's wonderfully atmospheric Stade Velodrome.

France will not sit back, a la Italy; it is not in their DNA. The strength of Didier Deschamps' side is in their attacking flair and in Dimitri Payet, Antoine Griezmann and Moussa Sissoko they have the guile and power to cause Germany problems.

Payet and Griezmann possess a beguiling speed of body and mind while Sissoko – the least gifted of the three – is a brute of an athlete.

It seems illogical to pit Kroos up against the trio, although Low's hand has been weakened by injuries to Sami Khedira and Bastian Schweinsteiger.

Khedira is definitely out with a strained groin while Schweinsteiger is struggling to recover from a knee problem.

If the latter fails to make it, it could mean starting places for Emre Can and Julian Weigl.

It is not the ideal scenario for Low but his biggest call of all is where to deploy Kroos.

If Low persists with him sitting in front of a defence already lacking the suspended Mats Hummels, he would be playing with fire.

It is a game others have played and lost.