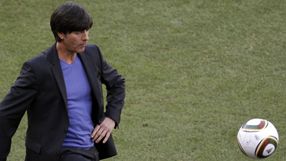 He claimed on Monday he was not superstitious but admitted that pressure from other coaching staff and players to keep wearing his familiar sweater had paid off ahead of their World Cup semi-final clash against Spain in Dutrban on Wednesday.

"The thing with the sweater is that I am not driven by superstition," a smiling Low told reporters. "The other coaching staff said I should be wearing the sweater now because every time I wear it we score four goals."

Germany beat England 4-1 in the second round and reached the semi-finals following a 4-0 demolition of Argentina, with Low donning the V-necked garment each time.

"I am not even allowed to wash it now and I think I will wear it again (against Spain)," he said.

"I do not know how many sweaters he has that are blue. But I hope he has the one or two left in his suitcase," he said.