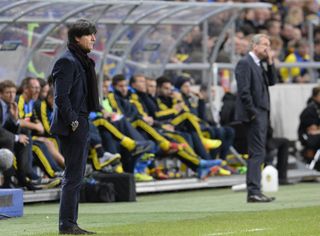 Goals from Tobias Hysen and Alexander Kacaniklic put the home side ahead in the FIFA World Cup qualifier at the Friends Arena.

However, a hat-trick from Andre Schurrle along with goals from Mesut Ozil and Mario Gotze were enough to ensure Germany ended their campaign unbeaten - despite Hysen completing a brace for the hosts.

"We were 2-0 behind, although we had plenty of possession and many chances." Low told the DFB website.

Germany gained a measure of revenge on the Swedes, who were the only side to take points off them in Group C after drawing 4-4 in the reverse fixture.

Bastian Schweinsteiger made his 100th appearance for Germany in Stockholm and he added that his team were disappointed with the goals they conceded.

"It's always nice when many goals are scored," he said.

"But the first half was funny. We had chances, but Sweden scored goals. I think we played very well - although a 5-3 is not a really good result. 2-0 would have been better."