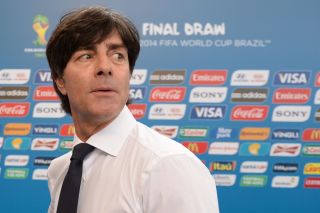 The draw - which took place on Friday - pitted the three-time champions Germany in Group G against the United States, who are managed by their former boss Klinsmann.

The fixture will be the two sides' final match of the pool in Recife on June 26.

Low - who served as assistant to Klinsmann - admitted that the pair still have a close relationship, but he was keen to stress that his side have two vital fixtures against Ghana and Portugal to contend with as well.

Speaking to ARD, he said: "I'm happy, it's not just the United States (game). It is also Ghana, against who we have already played in 2010, Portugal, that we had in 2012 (at the European Championships).

"But the USA is something very special, especially in Germany. Jurgen and I have a very close relationship for a long time now. But, of course, there are things you do not talk about ahead of this kind of match."

Former Germany international Oliver Bierhoff - who now assists Low in the national set-up - believes his side will be favourites to progress from the group, but admitted to concerns over the climate.

"The opponents are beatable, we are the favourites," he commented. "But I am a little bit worried about the temperatures.

"But the other teams have to deal with (that) too."

Germany open their campaign against Paulo Bento's Portugal on June 16 in Salvador, before facing Ghana five days later in Fortaleza.