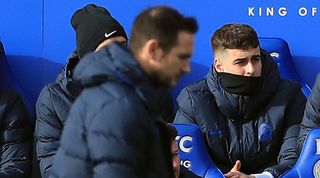 Spain manager Luis Enrique is concerned about Kepa Arrizabalaga's lack of game time at Chelsea ahead of Euro 2020, reports AS.

Kepa has been on the bench for the Blues' last five matches in all competitions, giving Enrique a selection headache about who will be his number one this summer.

The Chelsea goalkeeper had actually moved ahead of Manchester United's David de Gea in the pecking order for the national team under previous boss Robert Moreno.

Yet now Enrique is back in charge, it is less obvious who will be first choice with Kepa not getting any minutes for his club currently.

The 24-year-old was preferred to De Gea by Moreno as the Man United 'keeper was enduring a significant drop in form this season.

But Blues boss Frank Lampard also seems unhappy with Kepa's performances, promoting 38-year-old substitute stopper Willy Caballero to be his number one instead.

Lampard said the Spaniard has responded well to being dropped, but as yet there is no indication that he will return to the starting XI ahead of Caballero.

Therefore Enrique needs to decide whether to stand by Kepa, return to De Gea, or potentially go with an entirely new option. The most likely candidate in the latter scenario is Roma's Pau Lopez.