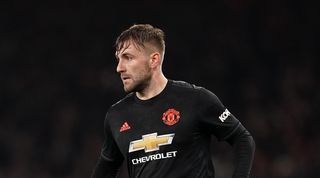 Ole Gunnar Solskjaer says Luke Shaw has the potential to be "one of the best left-backs in England".

Manchester United sold Ashley Young to Inter earlier this week, but Solskjaer does not think he needs to sign a replacement.

Shaw has recently been sidelined with a hamstring injury but is fit enough to face Liverpool on Sunday.

And Solskjaer has backed the former Southampton left-back to become one of the leading players in his position in the Premier League.

"When this situation came up, and the options we’ve got at full-back - you’ve got Brandon Williams who has really come through and developed," he told United's official website.

"Aaron Wan-Bissaka has been fantastic. Luke Shaw is potentially one of the best left-backs in England, for me. Then we’ve got Diogo Dalot and Tim Fosu-Mensah, they’re both fit. You’ve got loads of full-backs.

“Ashley’s mindset was that he wanted to try a new adventure and he he’s approaching 35 now. He’s done a fantastic job and he’s served this club fantastically.

"I think it was an opportunity for him that we had to say yes to. We got a transfer fee for someone who’s been so loyal to the club. Good luck.

"That’s what Manchester United do, you have players for a long time and then they move on and someone else steps in.”

Solskjaer has named Harry Maguire as Young's replacement as club captain, and the Norwegian has praised the new skipper's leadership qualities.

"He’s had a great impact and he’s a great personality. He’s a leader - we’ve got leaders in the group, different types of leaders. We’ve got Marcus Rashford, who’s a young boy showing leadership skills. We’ve got Scott McTominay, David de Gea and Juan Mata, they’ve been around for so long now.

"Harry has come in and he’s playing every game, he’s fit and he’s leading that dressing room.”

United will move to within two points of the top four if they beat Liverpool at Anfield.