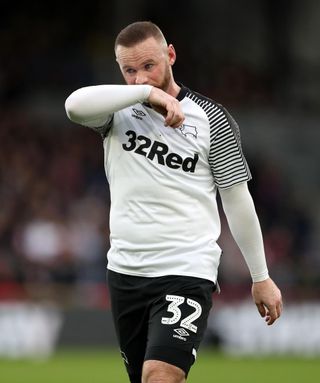 Wayne Rooney scored his first goal for Derby but could not prevent Luton from claiming a first win since December 7.

The Hatters won 3-2 in a topsy-turvy game at Kenilworth Road, sparked by Rooney’s deflected opener just after the hour.

Pelly Ruddock and Donervon Daniels turned the game on its head but there was still time for a dramatic finale, substitute Chris Martin equalising for Derby only for Jayden Bogle’s own goal to immediately restore Luton’s lead. Derby then had Max Lowe sent off.

The Hatters started well as Harry Cornick picked up keeper Simon Sluga’s long clearance that beat the visitors back-pedalling defence, but he was unable to chip Derby stopper Ben Hamer.

County’s only opportunity of the first 20 minutes saw Rooney escape the attentions of the home defence before shooting straight at Sluga.

Cornick once again found space in the area, firing at Hamer, while Kazenga LuaLua’s fierce effort after cutting in from the wing was deflected behind.

On the stroke of half-time County almost broke through but Tom Lawrence’s close-range prod from Duane Holmes’ low cross, under pressure from Glen Rea, went wide.

A crazy second period saw Lawrence try his luck from further out, sending his shot over the top, before volleying against the bar from just a matter of yards.

County did break through on 63 minutes though, when Rooney found space just outside the box and his curler deflected past Sluga and into the net.

Luton should have levelled straight away, Cornick’s shot from close range hitting Hamer’s legs and going over.

He then won another corner on 67 minutes and from the delivery, the ball dropped to Ruddock on the edge of the box, his low shot also taking a deflection on its way in to make it 1-1.

Town were then in front on 73 minutes as James Bree swung over a corner and Daniels was there to power his header beyond Hamer and into the net for his first goal for the club.

Derby brought on Martin and he made it 2-2 with five minutes left, producing an unstoppable close-range header.

However, Town swept straight down the other end to score what proved to be the winner, Cornick dinking over the advancing Hamer and the unlucky Bogle miscuing his desperate clearance attempt.

Keeper Hamer then picked up a backpass to see yellow, while Lowe pushed referee Andy Davies in the aftermath of the decision to receive his marching orders.

Izzy Brown hammered the free-kick over but it mattered not as the Hatters could finally celebrate a long overdue victory.