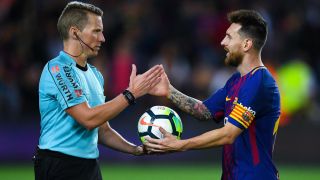 Another standout performance, another milestone for Lionel Messi.

The Barcelona superstar struck four times in a 6-1 thrashing of Eibar in La Liga on Tuesday.

Messi opened the scoring from the penalty spot and then netted three times in the second half of the comfortable win.

With his latest display, the 30-year-old brought up 300 goals for Barcelona at Camp Nou.

Messi already has nine La Liga goals this season, and he has been clinical in recent outings.