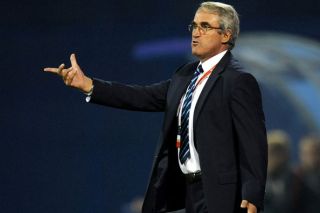 Malta's campaign to reach the 24-team tournament in France started with a 2-0 loss against Croatia last month.

And it does not get any easier for the 155th-ranked nation, with fixtures against Norway and Italy to come in the next week.

Both matches are at home, though, and for Ghedin – a member of Italy's coaching staff from 1996 to 2005 – the visit of Antonio Conte's side will be a special occasion.

"The first will be more physical, while the second will be more tactical, and I am sure Italy will be very strong.

"Italy have great personality. I always have great feelings as I look back to my days with the Azzurri [Italy] but now I work for Malta.

When asked if Malta fans would see another European Championship qualifying win in this campaign – their last came in 2006 – Ghedin responded: "Yes. We have to make that happen.

"I am quite upbeat about my squad. The important thing is that my boys are improving all the time and are getting there.

"I am very confident [we will win a game during qualifying]."

Malta have played Italy twice since 2012, losing both matches 2-0.