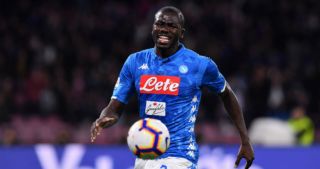 Manchester City may have completed transfers for defender Nathan Ake and winger Ferran Torres over the last few days, but it appears as though manager Pep Guardiola still plans to bolster both defence and attack.

City already needed to strengthen at the back coming into this transfer window: Guardiola had used 35-year-old Fernandinho as a makeshift centre-back throughout the 2019/20 season, following the departure of Vincent Kompany a year ago. But the news that 19-year-old Eric Garcia has rejected a new contract in Manchester means that it is unlikely Ake will be the only defensive recruit.

According to Sky Sports, Napoli's Kalidou Koulibaly remains the primary target. The 29-year-old has been a wanted man all over Europe for a couple of years now, and at times it has seemed as though Manchester United were the frontrunners for his signature. However, they opted for Harry Maguire last summer instead – beating City to the transfer in the process.

Koulibaly would probably cost somewhere in the region of £80m – more than Ake and Torres combined.

Inter Milan's Lautaro Martinez has also been linked with City in recent days, touted as a potential long-term successor to fellow Argentine Sergio Aguero. The 22-year-old is reportedly wanted by Barcelona too, and a £98m price tag has been thrown around in the papers. A move to Catalonia could rest on whether Barça are able to offload Philippe Coutinho to Arsenal, or another deep-pocketed suitor.

Finally, The Athletic mooted a possible move for Atletico Madrid's Joao Felix this week. It's not exactly clear how much this would hit City's wallets for (a cursory Google will deliver you all sorts of answers, if you're interested), but he joined Atletico from Benfica for a steep £113m only a year ago.

City had already been interested in the Portuguese forward, but were put off by Benfica's unwillingness to negotiate below that release-clause figure. While he's not had the best debut season in the Spanish capital (scoring only six La Liga goals), could they really expect to get him much cheaper than that now?