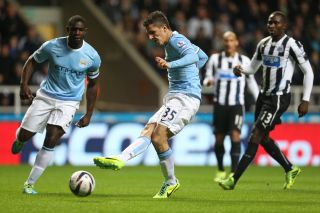 Striker Jovetic has not featured since October due to a calf injury and then illness, but Pellegrini expects the former Fiorentina man to be back in contention to face Newcastle United a week on Sunday.

Defenders Richards and Demichelis are also closing in on a return after being sidelined with hamstring injuries, but they will not feature against Blackburn Rovers in the FA Cup third round on Saturday.

City boss Pellegrini is unsure how long leading scorer Sergio Aguero will remain on the sidelines as he recovers from a calf injury.

The Chilean said: "I don't think he (Jovetic) will be back against Blackburn but by next week he will be fit, also Martin Demichelis and Micah Richards, then we will see how many days Sergio Aguero must be out."

Out-of-favour striker John Guidetti continues to be linked with a transfer away from the Etihad Stadium and Pellegrini will not stand in the Swede's way if the opportunity to move on arises this month.

He said: "We will see now we are in January.

"John was not at Swansea because he had a little problem in his knee but we will see in the transfer window if he goes – maybe it's a chance for him to start playing.

"We have four very important strikers, and John must play after being out for a long time with an injury to his knee."

In-form City have won their last seven games and have not been beaten since the 1-0 defeat at Sunderland almost two months ago.