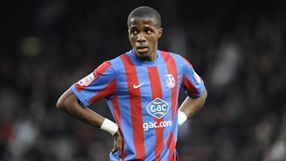 The Ivory Coast-born 20-year-old, who left west Africa as a four-year-old, will be immediately loaned back to Crystal Palace for the remainder of this season before joining the Premier League leaders in July.

Neither club gave any financial details but British media have widely reported the deal to be worth 15 million pounds.

"We can also develop players well here. That's proved to be the case many times. Hopefully the boy will enjoy it coming here when he eventually does join us in the summer."

Ferguson has often bought in young players and shipped them out to other clubs to gain more experience.

One such example is 21-year-old striker Federico Macheda who since arriving at Old Trafford in 2008 has had spells at Sampdoria, Queens Park Rangers and this week was sent on loan to VfB Stuttgart for the remainder of the season.

Zaha's displays for Palace have caught the eye of the Premier League elite, with Arsenal also thought to be in the running to seal a deal until manager Arsene Wenger this week said he was not interested.

His arrival at Old Trafford could set alarm bells ringing for Portuguese winger Nani, who has increasingly found it hard to claim a first-team spot against Ashley Young, Antonio Valencia, Shinji Kagawa and Ryan Giggs.

For now, Zaha's mind is firmly on Crystal Palace's promotion push with the London side sitting fourth in the Championship table.

"I am delighted to be joining Manchester United and ending the recent speculation," Zaha said on the Palace website.

"I would like to thank the owners at Palace for making the move possible, however my focus for the next five months will be solely at Crystal Palace.

"I have been at Palace for more than 10 years, I will always love the club and I want to help get them back to the Premier League, particularly for the fans who have always been so good to me."

Zaha made his England debut as a substitute in the 4-2 friendly international defeat by Sweden in November last year, becoming only the second Championship outfield player in five years to be called up by England.

He is still eligible to play for the Ivory Coast because the game in Stockholm was classed as a non-competitive match by FIFA.

Zaha will undergo a medical at United on Friday and Palace said they expected the deal to be concluded early next week.

"We would like to thank Wilf for all he has done for the club and we all wish him well when he joins Manchester United in the summer," Palace co-chairman Steve Parish said on his club's website.

"It was essential to Wilf and ourselves that he stayed at Palace for the remainder of this season to help the club with its main aim of promotion to the Premier League."