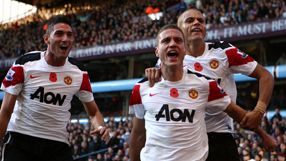 An Ashley Young penalty after 72 minutes and a tap-in by Marc Albrighton four minutes later had put Villa on top with 14 minutes left but United rallied in the last nine minutes.

While a draw represented a good result in the end for the red half of Manchester, a point was failure for the blue half.

Fourth-placed Manchester City's unconvincing push for the title received a setback when they failed to score at home for the third successive match after being held to a 0-0 draw in a boring match at Eastlands by lowly Birmingham City.

They had also played out a goalless stalemate with Manchester United on Wednesday and disgruntled home fans jeered their team during and at the end of the match.

Liverpool's climb up the table was halted in its tracks when Stoke City beat them for the first time in 26 years, deservedly winning the evening kick-off 2-0 at the Britannia Stadium.

Injury-hit Tottenham Hotspur were the highest scorers, beating Blackburn Rovers 4-2 at White Hart Lane with Gareth Bale scoring twice to help his entertaining team climb one place to sixth and end a four-match run without a win.

Manchester United, who looked to be heading for their first defeat of the season in any match, stretched their unbeaten run to 26 matches in all competitions, their best sequence for 11 years, but the statistics disguised another poor performance.

United have drawn six of their seven away league matches and did not show the form of potential champions.

"We could have lost six goals in the second half, they had some great chances and we were all over the place," Sir Alex Ferguson told Sky Sports.

"Great credit to Aston Villa, they never allowed us any time to settle on the ball. They hit us on the counter-attack time and time again."

The title aspirations of big-spending Manchester City took another knock after they failed to break down Birmingham.

Coach Roberto Mancini was booed when he took striker Carlos Tevez off and replaced him with midfielder Gareth Barry as City played out a third successive home match without a goal.

Afterwards, a defiant Mancini told reporters he was not under any pressure, despite what they thought.

"What pressure? For what? You continue to say I am under pressure. Which pressure? Because some supporters say I did not put two strikers on, or journalists say I am too defensive?

"I am not under pressure. We are in fourth position. We have some problems. We must improve that. But we have only played 13 games."

City have 22 points and are a point behind Arsenal and still three clear of Bolton Wanderers, who held on for a thrilling 3-2 win at Wolves who fought back from 3-0 down, and Tottenham.