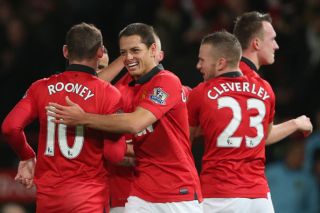 Javier Hernandez made the most of his opportunity in the starting XI with a brace in front of the Old Trafford faithful, before late strikes to Phil Jones and Fabio sealed the comprehensive result.

Round, though, said United - who have struggled in the Premier League this term - would be taking the result in their stride.

"This club is used to winning, it has a winning mentality," Round said.

"There were no great celebrations after the win on Saturday and none tonight.

"We just move on to Fulham, that is how it is.

"You need to go on runs in this league and this club is the best in the business at building that."

Round spoke highly of Mexico international Hernandez, hailing the opportunistic striker for his strength despite being behind Robin van Persie and Wayne Rooney for a spot up front.

"He is such a good character. I don't think it has fazed him at all," Round said.

"He is a really infectious character who loves to score goals.

"He has waited patiently for his opportunities and when he gets them he has taken them.

"He had a good chance at the death with a header to make it three and get his hat-trick, but I'm sure he'll take two and move onto the next game."

Round conceded United were fortunate to get their opening goal, when Hernandez converted from the spot after Leroy Fer made contact with Adnan Januzaj.

"I didn't look like a penalty to me, it looked like he slipped over, and it was very harsh on Norwich," he said.

"In the end I suppose it didn't really matter because the other goals made it comprehensive."