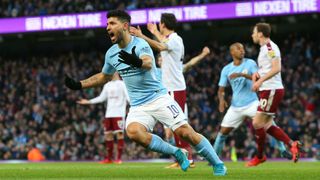 Sergio Aguero scored twice in 93 seconds to help send Manchester City into the FA Cup fourth round with a 4-1 victory over Burnley.

The runaway Premier League leaders fell behind when Ashley Barnes, who had earlier missed a glorious chance, lashed home a superb 25th-minute opener after John Stones failed to deal with a bouncing ball.

Pep Guardiola's side won October's Premier League meeting between the two 3-0 and that gulf in class was certainly more apparent in the second half, in which Aguero struck a double blow, with Leroy Sane and Bernardo Silva also scoring.

Ilkay Gundogan provided the assist for the first two, but the equaliser was not without controversy as the Germany international's quickly taken free-kick caught the Clarets napping and Aguero stroked home.

The visitors barely had time to regroup before Gundogan's clever flick picked out Aguero, while Sane prodded in the third and Bernardo Silva added the fourth to settle matters.

Aguero's brace took his tally of FA Cup goals to 11 in only eight appearances in the competition at the Etihad Stadium, where City remain unbeaten in all competitions since December 2016.

City threatened early on and David Silva was denied by a combination of Ben Mee and the upright after connecting with a cutback from Aguero.

Aguero again caused problems in the 15th minute and was clattered on the edge of the box by Ashley Westwood, with Gundogan's consequent free-kick striking the wall.

Burnley sounded a timely reminder that they too were in the contest as Mee's header from a corner was sent back across goal, where Barnes somehow failed to turn home from point-blank range.

And it was the Clarets who broke the deadlock when Stones swung wildly at the ball following Nick Pope's long clearance, sending it skidding through for Barnes – who also scored in Manchester against United on Boxing Day – to run on and fire brilliantly beyond Claudio Bravo at his near post.

The home side went in search of a response before the interval, but a well-drilled Burnley team offered few opportunities for them to do so.

Guardiola's men upped the tempo early in the second half and got their leveller when the visitors switched off at a free-kick, Gundogan picking out Aguero to finish with ease, though Burnley boss Sean Dyche was clearly livid the goal was allowed to stand.

The Argentina star doubled his tally when he collected Gundogan's backheel, rounded Pope and tapped in to turn the game on its head.

Sane should have put the tie beyond reach soon after, but side-footed over the crossbar from just four yards out, only to make amends with a neat finish from a tight angle 19 minutes from time.

City, whose hopes of winning silverware on all fronts remain very much alive, added a fourth in the closing stages after Pope raced out of his box and Bernardo Silva profited by passing into an empty net.

Next up for Guardiola's side is Tuesday's EFL Cup semi-final first leg against Bristol City.