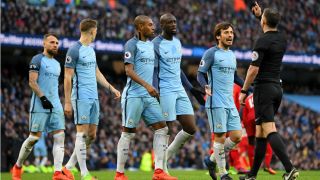 Manchester City have accepted a Football Association charge of failing to control their players during last weekend's 1-1 draw against Liverpool at the Etihad Stadium.

The charge related to City's reaction after a penalty was awarded against them - referee Michael Oliver penalising Gael Clichy for a foul on Roberto Firmino.

Some members of Pep Guardiola's side continued their protests after ex-City man James Milner converted the spot-kick.

The FA is yet to consider a sanction. Manchester United pleaded guilty to the same charge last week in an incident relating to their FA Cup quarter-final defeat at Chelsea and were fined the standard £20,000 penalty.

Sergio Aguero netted a second-half equaliser at the Etihad Stadium to keep third-placed City one point ahead of Liverpool in the Premier League table, with a game in hand.