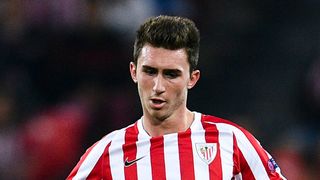 Laporte has been strongly linked with a move to the Premier League leaders, who are expected to meet his €65million release clause and break their transfer record to complete a move.

But Ziganda indicated Laporte remains available for selection despite ongoing rumours about his future lying away from Athletic.

"I count on Aymeric for tomorrow," Ziganda told reporters on Thursday. "Without the injured players we will do our last training and we will give the call-up.

"We have to face this kind of news, but the important thing is the match of tomorrow.

"Aymeric is available to train - he is calm."

Laporte was close to joining City in 2016 after the appointment of Pep Guardiola, despite having a broken ankle, only to reject the move in favour of staying at Athletic.

Ziganda "I count on Aymeric for tomorrow, without the injured players we will do our last training and we will give the call-up." January 25, 2018