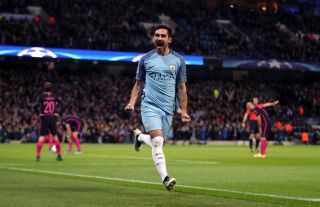 Manchester City put one foot in the Champions League quarter-finals with an impressive 2-1 victory over Real Madrid at the Bernabeu on Wednesday.

The manner of the first-leg win made it one of the club’s best performances in European competition in recent history.

Here, the PA news agency looks at five other great City showings in the Champions League over the past few years.

City staged a stunning fightback at the Allianz Arena in their first statement victory away from home. Manuel Pellegrini’s side trailed 2-0 after 12 minutes following goals from Thomas Muller and Mario Gotze, before David Silva, Aleksandar Kolarov and James Milner turned the game on its head. Both sides had already progressed to the knockout stages, but City managed to end Bayern’s run of 10 consecutive Champions League wins.

Kevin De Bruyne’s goal secured City’s place in the Champions League semi-finals for the first time after a thrilling 1-0 win at the Etihad Stadium, which sealed a 3-2 aggregate victory. Sergio Aguero missed a penalty in the first half but – with a capacity 53,039 crowd supplying arguably the best European atmosphere seen at the Etihad Stadium – the Belgium international struck with 15 minutes remaining.

Pep Guardiola produced a tactical masterclass as City ran Barcelona ragged in Manchester. Lionel Messi had given the Spanish giants a 21st-minute lead but Ilkay Gundogan deservedly equalised before the break. De Bruyne’s free-kick put City in front and their first-ever victory over Barca, at the sixth attempt, was sealed by Gundogan’s second goal of the evening with 16 minutes left.

Aguero became the club’s all-time top scorer with a second-half strike which put City ahead in a pulsating contest at Stadio San Paolo. Again they had to win the hard way, recovering from 1-0 down to lead 2-1 thanks to goals from Nicolas Otamendi and John Stones. Jorginho equalised from the spot for the Serie A side on the hour mark, before Aguero fired home his 178th City goal and Raheem Sterling added a fourth in added time.

City ran riot in the second leg of their last-16 clash with Schalke, sealing a remarkable 10-2 aggregate win at the Etihad Stadium. Aguero scored twice, including a deft penalty, with Leroy Sane, Sterling, Bernardo Silva, Phil Foden and Gabriel Jesus also among the scorers on an utterly dominant evening for Guardiola’s side.