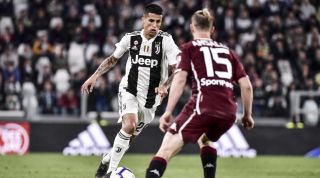 The Portugal international has enjoyed an impressive season in Italy as he helped Juventus win an eighth consecutive Serie A title.

Cancelo’s form has attracted the attention of both Manchester clubs ahead of the summer transfer window, according to Italian daily Gazzetta dello Sport.

Both clubs are set to free up a right-back spot, as City are prepared to sell Danilo and United look set to let Matteo Darmian go, with Inter Milan showing interest in the Italian.

The two Premier League giants have gathered information about the wing-back ahead of a potential summer swoop.

Cancelo joined the Old Lady from Valencia for €40 million last summer and is now said to be valued in the region of €60 million (around £51 million).

The 24-year-old has scored one goal and provided five assists in 23 league appearances for Juve this season.