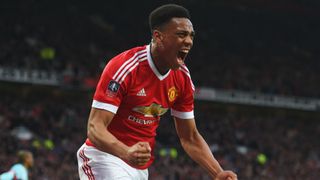 A late equaliser from Anthony Martial saved Manchester United as they preserved their place in the FA Cup with a 1-1 quarter-final draw against West Ham at Old Trafford.

A moment of magic from Dimitri Payet had West Ham seven minutes from a famous victory that would have sent them to a Wembley semi-final, but Martial struck from close range to force a replay.

Playmaker Payet, who has wowed fans throughout his first season in England, had put West Ham in front with an incredible 30-yard free-kick earlier in a second half that also saw both teams have good claims for a penalty turned down.

Martial's intervention means United are still in the FA Cup, a competition that represents their best chance of silverware as they sit behind West Ham in sixth position in the Premier League and are 2-0 down to Liverpool after the first leg of their Europa League last-16 tie.

West Ham, meanwhile, will be still dreaming of the trophy if they can join Crystal Palace, Everton and Watford - who defeated holders Arsenal on Sunday - in the last four.

The visitors could have taken an early lead, but Emmanuel Emenike dragged his shot just wide after being played in by a hooked pass from Andy Carroll, who was brought into the team as one of three changes from Slaven Bilic.

Even though United were getting forward, it was West Ham who were creating the better chances, with Carroll's thumping header from Aaron Cresswell's cross only narrowly over.

Emenike then rose to divert another Cresswell delivery into the arms of David de Gea in what proved to be the only attempt on target in the first half, before Ander Herrera was off-target with a volley at the other end after Martial set him up from the left.

United were unhappy not to be awarded a penalty from referee Martin Atkinson when Martial found Herrera and the midfielder's shot bounced off Winston Reid's leg and arm as he slid to block just before the hour mark.

Darren Randolph then got out quickly to deny Marcus Rashford, before West Ham were denied what they thought should have been a spot-kick when Payet cruised past Marouane Fellaini and went down under pressure from Marcos Rojo, who appeared to be trying to pull out of the challenge but did make contact.

However, Payet produced a moment of brilliance with 22 minutes remaining. After being fouled by Daley Blind around 30 yards from goal, he stepped up and delivered an astonishing, dipping free-kick that clipped the post on its way past De Gea.

The under-fire Van Gaal brought on Memphis Depay and Bastian Schweinsteiger in an attempt to find an equaliser and one arrived just as the hosts looked to be heading to defeat. Jesse Lingard played in Herrera down the right and he stood up an excellent cross to the far post, allowing Martial to hook home with his left foot.

Michael Carrick drilled an effort just wide as United threatened an unlikely comeback, while De Gea made a vital stoppage-time stop from Michail Antonio to ensure the two teams now have to do it all again at Upton Park.