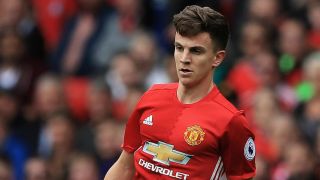 Josh Harrop scored on his debut as the youngest Manchester United side in the club's Premier League history defeated Crystal Palace 2-0 at Old Trafford.

Three days before the Europa League final against Ajax, Jose Mourinho made nine changes on his 250th game as a manager in England's top flight, with Demetri Mitchell, Harrop and substitute Angel Gomes given United debuts.

And United impressed in a first-half performance that proved enough to secure a comfortable victory prior to their season-defining trip to Stockholm.

Harrop relished opening the scoring with a fine finish after being set up by Paul Pogba, who then quickly doubled United's lead on his return from compassionate leave following the death of his father.

Pogba and Jesse Lingard were both substituted before half-time as Mourinho took no chances ahead of an Ajax match that could give them a second major trophy of the season and seal a place in next season's Champions League.

Palace edged a quiet second half, Christian Benteke hitting the post with a header as they failed to find a way back into the game.

The hosts finish the season sixth in the table on 69 points, while Palace drop to 14th on 41.

.'s week just keeps getting better!Monday: Hat-trick for our Reserves. Sunday: Senior debut and scores after 15 minutes.  May 21, 2017

United created the first chance when debutant Mitchell floated a pass into Wayne Rooney's path and the captain's chip over Wayne Hennessey only just cleared the crossbar.

But the hosts did not have to wait long for an opener, Harrop enjoying a moment he will never forget after just 15 minutes.

It was Pogba's throughball that created the opportunity, but Harrop still had plenty to do before cutting inside past Martin Kelly and unleashing a fine finish into the far corner, the Old Trafford crowd erupting in celebration.

And it was two for United within four minutes, a fast counterattack capped when Lingard's pass found its way to Pogba after a mistake from Joel Ward, allowing the France international to fire a low left-footed finish beyond Hennessey.

Benteke failed to connect with corner from close range with Joel Pereira stuck to his line at the other end as Palace went into the break two goals behind, Mourinho having made two changes prior to the half-time whistle with Pogba and Lingard replaced by Michael Carrick and Anthony Martial.

Eric Bailly, already suspended for the Europa League final, limped off with an injury for United early in the second half, having landed awkwardly after an aerial challenge with Benteke.

And Luka Milivojevic then had a free-kick saved by a stretching Pereira on his Premier League debut as United held on to a clean sheet.

Rooney received a generous ovation from the United support as he came off in the closing minutes on what could be his final appearance at Old Trafford, 16-year-old prospect Gomes coming on in his place to round off a positive day for Mourinho's men.