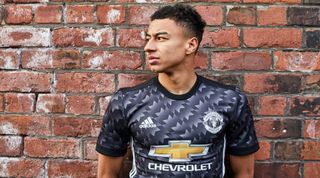 As Manchester United continue their pursuit of off-field dominance (if not on it), shirt manufacturers adidas have already revealed their away kit for next season.

According to the kit maker, the shirt is "as much at home on the streets as it is on the pitch", which probably explains why Jesse Lingard is standing in front of a brick wall looking a bit dodgy in his model shot.

The shirt pattern is similar to that of the 1990-92 away jersey, but is a darker grey colour as opposed to the blue and white of the original strip.

The staple adidas three stripes are prominent, as is the logo of car manufacturer Chevrolet slapped on the front.

Anyway, here's Luke Shaw standing in a goal net (presumably where Jose Mourinho has him kept).

... and Phil Jones just pleased to be there.