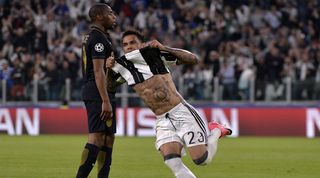 Juventus beat Monaco 4-1 on aggregate to progress to the Champions League final, winning the second leg 2-1 against the French outfit.

Both of Juventus's goals in Turin came in the first half, with Mario Mandzukic practically ending the contest in the 33rd minute before Dani Alves let rip with one of the best goals of the Champions League campaign.

With just a minute of the first half left to play, a corner punched high into the air by goalkeeper Danijel Subasic eventually dropped to Alves outside the box. The 34-year-old Brazilian smacked the ball on the volley first time, sending it rocketing into the back of the net.

Just a reminder: Juventus got him on a free transfer from Barcelona last summer. Oh, Barça.