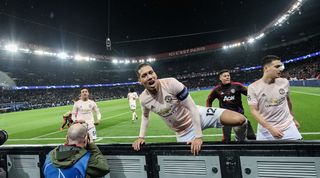 Local authorities ruled that both Manchester clubs would not be allowed to host games on the same night or on consecutive nights.

European football’s governing body announced today that United’s fixture will be reversed should the two teams be drawn to play at home in the same game week during Friday’s quarter-final draw in Nyon.

This is because the Red Devils finished lower in the Premier League table than their city rivals in the 2017/18 season.

"Following a decision made by relevant local authorities, Manchester City and Manchester United cannot play at home on the same night, nor on consecutive nights," UEFA said.

"Should both clubs be drawn within the same sequence [home or away], the team having finished lower in the domestic league the previous season – in this case United - will be reversed in accordance with the UEFA Club Competitions Committee principles.

"In accordance with paragraph 21.01(b) of the UEFA Champions League regulations, the UEFA administration will determine which matches will be played on Tuesday, which matches on Wednesday."

The quarter-final and semi-final draw takes place at 11am on Friday, with Liverpool and Tottenham also among the eight teams waiting to discover their fate.