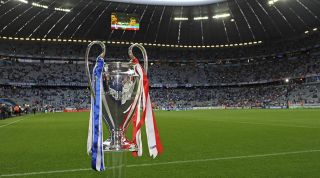 The draw for the quarter-finals of the Champions League will take place at 11am GMT on Friday in Nyon, Switzerland.

All four English clubs are through to the last eight for the first time since 2008/09, where Chelsea edged out Liverpool, Arsenal beat Villarreal and Manchester United marched to the final via Porto.

With that in mind, there is now no seeding or protection from meeting league rivals – so the chances of an all-Premier League meeting is strong here.

Liverpool were the last English club to book their place after claiming a terrific 3-1 win at Bayern Munich on Wednesday, following Manchester City's 7-0 romp (10-2 on aggregate) over Schalke.

Before that, Manchester United had the VAR to thank for the Marcus Rashford penalty which pushed them through at PSG, while Tottenham were comfortable 4-0 aggregate victors over Bundesliga high-fliers Borussia Dortmund.

NOW READ... How Lionel Messi finally became the player he was expected to be (no, really)