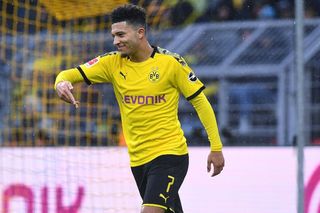 Jadon Sancho has the potential to be one of the best players of his generation, with the biggest Premier League clubs all clamouring to secure his return to England.

Since leaving Manchester City in 2017 for fear that he wouldn’t be granted the first-team opportunities he needed to continue his development, Sancho has taken European football by storm.

The winger turned 20 just last week, but has already made 90 appearances at the top level, scoring 31 goals and setting up a further 42.

It’s a remarkable record that, together with his routinely electrifying performances, has made him one of the most highly sought-after players in the world.

Liverpool, Chelsea and Manchester United have all been vying for his services but it’s the Red Devils who believe they have won the race.

According to the Irish Independent, figures at Old Trafford have suggested that Sancho has already "unofficially confirmed" he will be joining the club.

The England international, who won his first cap against Croatia in October 2018, has reportedly been offered a wage that will rise to £400,000 if he continues to progress.

Sancho has also been promised the famous number seven shirt, previously worn by Eric Cantona, David Beckham and Cristiano Ronaldo among others, should he sign for United.

Having lost out on Erling Haaland, who elected to join Sancho at Borussia Dortmund, the club hierarchy are determined not to miss out on another bright young prospect as they look to rebuild.

Yesterday marked a year since Ole Gunnar Solskjaer was given the United manager’s job on a permanent basis and six new faces have joined the club during that time.