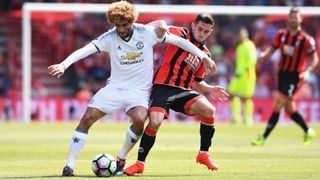 Fellaini has been an unpopular figure with sections of the Old Trafford faithful since being signed by David Moyes in 2013, but he excelled in the 3-1 Premier League win at Bournemouth on Sunday.

Mourinho acknowledged that Fellaini has work to do to turn around supporters' opinions, but suggested the midfielder will be an "important" player for United this season.

"With Fellaini I always have the feeling that he was not loved by the general Red people," Mourinho told MUTV.

"But if he plays like he's playing now, they have to love him because he's being so important for us.

"[Eric] Bailly and Daley [Blind] played well, the midfield players had an unbelievable complement for each other."

Juan Mata's opening goal was hailed by Mourinho as the crucial moment of Sunday's game, with Wayne Rooney and Zlatan Ibrahimovic also on the scoresheet before Adam Smith's late reply for the hosts.

"One goal changes the picture as in the beginning of the second half they tried to put more pressure on us, which opened more spaces," Mourinho said.

"The opening goal is always important - it doesn't mean you win the match but on a psychological level it brings the confidence up and the team could play very well in the second half."

United captain Rooney picked out strike partner Ibrahimovic for praise after the Swede continued his run of scoring on his debut competition appearance by finding the net on his first games in the Champions League, La Liga, Serie A and Ligue 1.

"Zlatan is obviously a top-quality player and it's always great to play with him," Rooney said.

"He's a target man but also has great feet. I just have to move off him and try to get to into the pockets of space that are available.

"He was unlucky with his free-kick [that was saved] and it was a good strike for his goal. He's played in different leagues throughout Europe and scored in all of them and I've no doubt he'll continue to score for us."