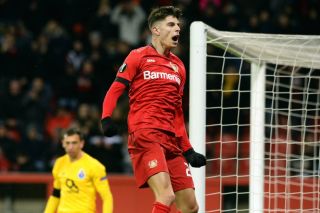 An underwhelming 1-1 draw away to Club Brugge in the Europa League last night underlined Manchester United’s need for fresh inspiration.

Anthony Martial was on the scoresheet to cancel out Emmanuel Bonaventure’s opener but Jesse Lingard once more toiled on his 200th appearance for the club.

More cut and thrust is needed from United’s midfield, and Bayer Leverkusen’s Kai Havertz could be the one to deliver it.

The club’s sporting director Rudi Voller has admitted that the 20-year-old could be allowed to leave for £80million this summer amid interest from several clubs.

As well as United, Liverpool are also supposedly tracking Havertz’s progress closely. The German international has scored 35 goals in 133 appearances since making his debut for Leverkusen October 2016.

His latest goal came from the penalty spot in last night’s 2-1 win over Porto in the Europa League, giving them a lead to protect at the Estadio do Dragao next week.

As well as competing in Europe, Leverkusen are currently fifth in the Bundesliga, six points behind leaders Bayern Munich. They are also through to the quarter-finals of the DFB-Pokal, where they will face Union Berlin.

An all-round midfielder who’s comfortable using either foot, Havertz hasn’t lived up to the remarkable heights he hit last season but remains one of the most exciting prospects in world football.

He recently became the youngest ever player to feature in 100 Bundesliga games, and has earned comparisons to legendary German midfielders like Michael Ballack and Toni Kroos amongst others.

Havertz plays with a presence and maturity that belies his tender years. Whether to Man United, Liverpool, or another of Europe’s biggest clubs, he will be moving on before too long.