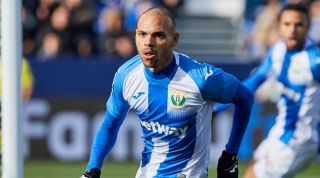 Barcelona have confirmed the signing of former Middlesbrough striker Martin Braithwaite for €18 million, weeks after the January transfer window closed.

An injury crisis at the La Liga giants has resulted in a league ruling that has caused some controversy in Spain.

So what’s going on, and who is involved?

The story begins with Ousmane Dembele’s injury. The forward was ruled out for around six months after tearing his hamstring in training on 3 February, joining long-term absentee Luis Suarez in the treatment room.

This left Barcelona in a bit of a pickle, with just three fit forwards left in their ranks: Lionel Messi, Antoine Griezmann and 17-year-old Ansu Fati.

The Catalan club subsequently sent official documentation to La Liga as they sought permission to sign an emergency forward.

The paperwork proved that Dembele had been injured after the close of the transfer window and will miss at least five months of football, and was passed through La Liga's medical commission.

Barça received the green light on Monday to make an emergency signing, under certain conditions.

The player must be brought in within 15 days of the ruling. They can only be signed from another Spanish club, and the injured player they are replacing (Dembele, in this case) will not be able to make a comeback or sign for another club before the end of the five-month period.

Furthermore, the new arrival will only be eligible to feature in La Liga, not in the Champions League.

Who is Martin Braithwaite?

Denmark international Braithwaite was immediately reported as Barcelona’s preferred target, with his agent Ali Dursun – who also represents Frenkie De Jong – arriving in the city on Monday for talks.

The 28-year-old’s name may well be familiar to followers of the English game, as he spent two seasons on Boro's books recently.

Braithwaite joined the Riverside club from Toulouse in the summer of 2017 for a reported £9m, though lasted just six months before being shipped out to Bordeaux on loan.

Last season, he scored three goals in 17 Championship games in the first half of the campaign but was sent on loan to Leganes in January, and his move to the Spanish side was made permanent last summer.

Braithwaite has scored six goals in 24 La Liga appearances this season, making him Leganes' top scorer in their bid to avoid relegation.

The experienced frontman, who has 39 caps for Denmark, had a release clause of €20m, although Barca successfully negotiated the fee down to €18m.

What are people upset about?

It appears to be a classic case of a big club getting what they want, and the smaller team losing out as a result.

Barcelona were unlucky to lose two key players to long-term injury, but it was their own decision to send Carles Perez and youngster Abel Ruiz on loan to Roma and Braga respectively in January, leaving few forward options behind at Camp Nou.

Leganes, understandably, will feel hard done by to lose their top scorer at a time when they are fighting tooth and nail for survival.

The club are currently 19th in the league, but just two points from safety. They are now unable to replace Braithwaite.

This appears to be particularly unfair given that the club already sold their star striker, 22-year-old Moroccan Youssef En-Nesyri, to Sevilla for €20m last month.

When that deal was arranged, Leganes would’ve at least been able to sleep easy in the knowledge that Braithwaite could spearhead their survival bid for the remainder of the campaign. Not any more.

None of their other centre-forwards – Guido Carrillo, Roger Assale and Miguel Angel Guerrero, have scored in La Liga yet this season.