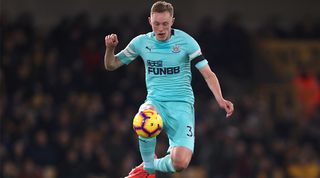 Ole Gunnar Solskjaer has a rebuilding job to do at Manchester United this summer, and Newcastle's young midfielder Sean Longstaff is said to be high on his wishlist for a rumoured fee of £25 million.

With Ander Herrera leaving this summer, Paul Pogba's future uncertain and question marks over the quality of Fred, Longstaff would provide good competition. As well as being heavily scouted by United, he's also been personally recommended by Michael Carrick; currently part of the coaching staff at United.

However, the deal may be tricky. Longstaff has no release clause in his contract, and Rafa Benitez has the final say over all transfer matters at Newcastle.

It's also unlikely that any decision on Longstaff will be made while Benitez's own future is still uncertain. Also, with Newcastle famously unwilling to spend big on new signings, Benitez would surely be loathe to lose a young prospect just as he's broken into the first team.

So for now it's a case of United having to be patient, and waiting to see what happens behind the scene at St James' Park before they make their move.