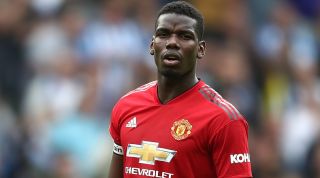 Manchester United could lose Paul Pogba, David de Gea and Romelu Lukaku if they fail to finish in the top four this season.

The Guardian report that the high-profile trio will consider their futures at Old Trafford should the Red Devils miss out on Champions League qualification.

Sunday’s 4-0 defeat by Everton leaves Ole Gunnar Solskjaer’s side three points adrift of fourth spot, although Arsenal and Chelsea’s failure to win at the weekend means they could still book their place in Europe’s foremost competition.

De Gea is out of contract in 2020 and appears unwilling to commit his future to the club until their fate is decided.

Pogba has been linked with a move away from Old Trafford since last summer, when Barcelona were interested in signing a player who cost United £89m in 2016.

Lukaku, meanwhile, has two years left to run on his deal and could seek pastures new having been in and out of the team under Solskjaer.

Six of the best Manchester derbies at Old Trafford