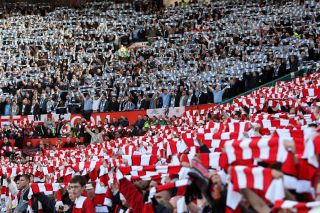 The 178th Manchester derby will see title-chasing City visit a United side licking their wounds from Sunday’s 4-0 humiliation at Everton.

City cannot afford a slip-up in their tense battle with Liverpool, while United fans will demand a response – even as they wrestle with the idea of beating City to put Liverpool in pole position for the title.

Here, Press Association Sport looks at six of the best derbies to have been played at Old Trafford.

Denis Law’s backheel did not actually relegate Manchester United – they would have gone down regardless given results elsewhere – but the former United star thought he had condemned his former team to the drop and refused to celebrate. Law later said he “almost wished I hadn’t” scored the goal. The Scot, who had scored 237 goals in 404 appearances for United, played his final season with City, and the goal would be his final act in league football. He was substituted immediately after, and retired after the World Cup with Scotland. The match itself ended in chaos as several pitch invasions forced the referee to end it early, with the Football League later deciding the result would stand.

Not a classic in footballing terms, and its impact on the league was limited – a point kept City’s survival hopes alive for a while though they were eventually relegated. Instead this one lives in the memory for Roy Keane’s horror challenge on Alf-Inge Haaland. Haaland actually finished the match, though his knee never recovered and the tackle ultimately ended his career. Keane later admitted it had been deliberate.

Four days after the 50th anniversary of the Munich air disaster, the match began with special tributes before kick-off as both sides lined up in commemorative 1958-style shirts. It would be City’s day on the pitch as they took control with goals from Darius Vassell and Benjani before Michael Carrick scored a stoppage-time consolation. The win saw City complete the league double over their rivals for the first time in 38 years.

Few derbies can match this edition for pure drama. City arrived at Old Trafford with £100million worth of new talent as the effect of Sheikh Mansour’s takeover began to be felt, and there was real belief in their play as three times they cancelled out United goals – the best of them Craig Bellamy’s outstanding 90th-minute equaliser. But they could not see out ‘Fergie time’ as Michael Owen won it in the sixth minute of time added on. Afterwards Sir Alex Ferguson said he was happy to have silenced his “noisy neighbours”, though it turned out he could keep the volume down only so long.

The best ever derby goal? United fans will tell you it was, City fans might tell you he shinned it. Either way, Wayne Rooney’s famous match-winning overhead kick in the 78th minute lives long in the memory. An online poll of fans in 2015 saw it voted United’s best derby goal.

United’s worst home defeat since 1955 came in particularly painful fashion. First there was Mario Balotelli’s ‘Why Always Me?’ t-shirt as he celebrated the opener, then the second-half collapse which followed Jonny Evans’ red card. Balotelli scored again, while substitute Edin Dzeko scored a brace to go with goals from Sergio Aguero and David Silva. The win put City five points ahead of United at the top of the table, and would come back to haunt Ferguson’s side in the dramatic finale to the title race, which City won by eight goals.