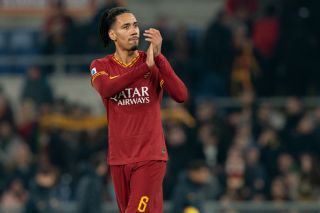 Plenty of experienced players have left Old Trafford this season with Ole Gunnar Solskjaer keen to reshape his squad, placing greater emphasis on youth and potential.

Following the arrival of Harry Maguire for £80million, making him the most expensive defender of all time, Chris Smalling was pushed further down the pecking order. He was eventually sent on loan to Roma at the end of August.

He made his debut against Atalanta at the Stadio Olimpico and proceeded to become a commanding presence at the heart of the Roma defence, even scoring goals invaluable wins over Udinese and Brescia.

Smalling is one of several United players to have moved to Serie A this season, with Matteo Darmian joining Parma while Romelu Lukaku, Alexis Sanchez and Ashley Young have all been reunited at Inter Milan.

With Maguire and Victor Lindelof established as Solskjaer’s preferred central defensive partnership, there looks to be little way back for Smalling, who has adapted well to life in Italy.

According to TEAMtalk, Roma have been impressed by the England international’s performances and are keen to make the move permanent. They have been set an initial asking price of £15million by Manchester United.

The fee might be an issue if the Giallorossi fail to qualify for the Champions League. They are currently fifth, level on points with Atalanta but behind them on goal difference.

Several Premier League clubs are also rumoured to be interested in Smalling. The 30-year-old defender has made more than 300 appearances for United since arriving from Fulham in 2010, and twice won the title under Sir Alex Ferguson.

During last season he signed a new deal that tied him to the club until 2022 but appears unlikely to see it through. Whether for Roma or another club, he seems destined to leave this summer.