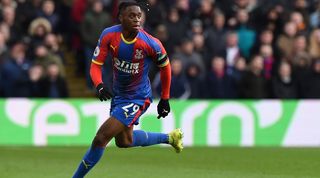 Manchester United could kick off a high-spending summer with a world record fee for a full-back this week.

According to the Daily Record, the Reds have already had a £55 million bid accepted by Crystal Palace for the 21-year-old.

The right-back, who scored an own goal while representing the England Under-21s in their European Championship defeat to France last night, has won plaudits for his performances at the south London club over the past season.

Palace boss Roy Hodgson has already admitted that Wan-Bissaka could be on his way out this summer, conceding that “every football player does have a price” – while pointing out that the youngster still has four years remaining on his contract.

The move would be a coup for United, with a number of Premier League clubs – including champions Manchester City – also keen on the full-back.