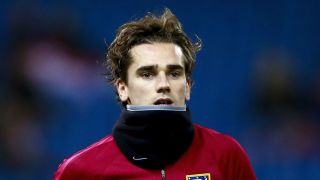 Atletico Madrid coach Diego Simeone is not surprised to see Antoine Griezmann linked with a transfer to Manchester United.

France star Griezmann has scored 12 goals in 25 appearances for Atletico this season, with Untied reportedly plotting a big-money move for the end of the campaign.

Simeone considers it natural that such clubs are interested in his star striker, despite him only recently ending a three-month spell without finding the net in LaLiga.

"I don't tie anybody down, I simply keep working to continue getting better for the sake of the club," the Argentine told a news conference ahead of Thursday's Copa del Rey quarter-final first leg against Eibar at the Vicente Calderon.

"He is in an extraordinary moment, is working well, has got back on the scoresheet and his form is good.

"It is normal that the best teams in the world want him. I am not surprised that the teams who are looking are the ones who can afford him."

Jan Oblak is also rumoured to be attracting Premier League interest. Manchester City are thought to be keen on the Slovenia goalkeeper, who is currently out with a shoulder injury.

Simeone said: "We hope he returns in the best way and continues helping to keep things going well.

"From the moment he arrived he gave us the best respect, work and consistency, to the club and the team."