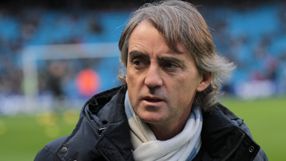 Mancini's team took United's title last term when a last-gasp 3-2 win over Queens Park Rangers on the final day put them level on points but with a better goal difference of 64 against 56.

This time free-scoring United's goal difference is 26 to City's 22.

"When we have a chance it is important to score a goal. We know very well we won the championship last year on goal difference," Mancini told Sky Sports.

"It is important not to concede a goal."

In the build-up to the New Year's Day games the Italian bemoaned the fact the league's top scorer Robin van Persie chose to join United, rather than City, from Arsenal in August and said the Dutchman could make the difference in the title race.

However, Mancini's hopes of at least getting level with United stems from City's comeback last season when they were eight points adrift in early April.

City fans will have feared for their chances of clawing back this term's deficit and trying to beat United's goal tally when striker Sergio Aguero limped off against Stoke after Pablo Zabaleta, Edin Dzeko and an Aguero penalty had settled matters.

The Argentine's hamstring problem, though, does not look serious and he may only miss Saturday's FA Cup third-round match with second tier Watford.

"It's difficult to assess an injury like that and how long it is going to be. Certainly on Saturday he will be out and my experience would say he will be doubtful for Arsenal [on January 13]," said City's assistant boss David Platt.

"But it is far too early to tell. There will be a lot of swelling in there and a bit of bleeding and, to be honest, we won't know for 48 hours how quickly it is going to settle down."