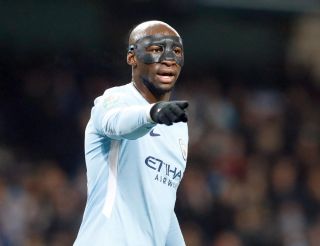 Valencia have announced an agreement with Manchester City defender Eliaquim Mangala that will see him join the club on a two-year contract.

The 28-year-old Frenchman, who has been sidelined by injury since February last year, will now look to revive his career in Spain.

City are yet to comment on the switch, but a statement on Valencia’s official website read: “Valencia CF have reached an agreement with Eliaquim Mangala that results in the French defender becoming a Valencia CF player until June 30, 2021 pending the completion of the definitive paperwork.”

Mangala joined City for a reported £32million from Porto in August 2014 and arrived as one of the most promising defenders in Europe.

He made an impressive debut against Chelsea in the September of the same year and played for the club on more than 60 occasions during his first two seasons in Manchester.

However, he spent the 2016-17 season on loan at Valencia and joined City’s Premier League rivals Everton on a similar basis in January 2018, but featured only twice before a serious knee injury ended his season, and he has not played a competitive game since.