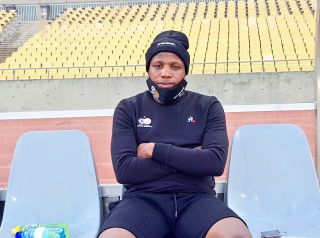 The 30-year-old attacker missed out on the team’s final training session on Wednesday after sustaining a strain on his low back, the national team confirmed on their official Twitter page.

Lebogang Manyama is sitting out of today's @BafanaBafana training session due to lower back strain pic.twitter.com/hZLh8bb2VNOctober 7, 2020

Manyama will have to race against the clock and undergo a late fitness test to determine whether or not he’ll be fit in time for Bafana’s encounter against Namibia.

However, Bafana coach Molefi Ntseki wants Manyama to lead the team from the front as a striker, despite playing in a attacking midfielder position at Amakhosi.

‘In terms of how we want him [Manyama] to play, we’ve selected him as a striker. We will be working on him at training to prepare him for the position that we want him to play,’ Ntseki told the media.

‘He has played before as a striker but for the role that we are bringing him in is a different one. That’s why we have him as a striker even though people are saying he has done well as a midfielder for Chiefs.

‘We have more of a profile for him where he played as a striker and he did very well.’

Bafana Bafana against Namibia kicks off at 7pm on Thursday evening.