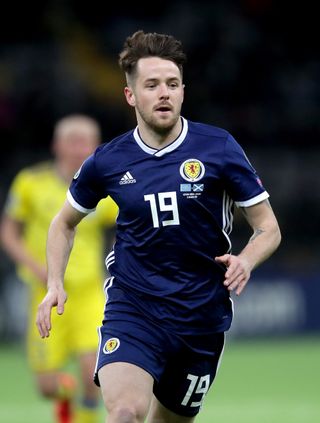 Marc McNulty helped himself to a hat-trick as Hibernian secured a 4-1 triumph over stubborn Lowland League outfit BSC Glasgow to reach the quarter-finals of the William Hill Scottish Cup.

McNulty produced a finishing masterclass with three superbly taken strikes, while Greg Docherty – who also produced two assists in an excellent showing – opened his account for Hibs in the dying embers.

Ross Smith’s header for BSC, which brought the scoreline back to 2-1 as half-time approached, was the least the hosts deserved at the Indodrill Stadium after belying a four-division gulf between the clubs for much of the contest.

Indeed, both teams should be commended for producing a watchable encounter amid the whipping gale of Storm Ciara.

The Broomhill minnows were looking to become the first non-league side to reach the quarter-finals since Elgin City in 1967-68 but showed little sign of being overawed in the opening stages as Martin Grehan tested Ofir Marciano from distance.

However, Hibs’ quality shone through when they grabbed the lead with their first serious foray forward.

Martin Boyle dashed forward and slipped a fine pass through to McNulty, who slammed a clinical low finish past Ryan Marshall for his first goal since returning to the club on loan last month.

Israel international Marciano was busier than he may have expected and was forced into a wonderful low save to deny Thomas Orr after the former Morton and Queen’s Park man wriggled into space on the edge of the box.

The visitors doubled their advantage on the half-hour mark when McNulty superbly controlled a Docherty delivery inside the penalty area and dispatched another super finish beyond Marshall.

The Hibees’ lead appeared insurmountable but Stephen Swift’s side refused to go down without a fight.

A deep free-kick delivery from Declan Hughes, a demolition worker by trade, left the Hibs back-line in ruins as Smith rose highest to head beyond Marciano.

BSC passed up a wonderful opportunity to restore parity when Tom Collins met a tantalising Jamie McCormack cross, only to scuff his effort tamely wide.

Swift’s side also felt they should have been awarded a spot-kick when Paul Hanlon nudged Orr in the back as they chased a loose ball.

But the underdogs were hit with a sucker-punch when Docherty sent McNulty haring clean through, allowing the Scotland striker to claim his hat-trick.

Fatigue understandably set in during the closing stages and Docherty added gloss to the scoreline with five minutes left, rolling into an empty net following a slick passing move involving Jamie Gullan and McNulty.