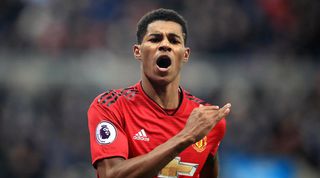 Harry Maguire believes Manchester United forward Marcus Rashford will continue to score goals between now and the end of the season.

The England international was on target twice in Ole Gunnar Solskjaer's side's 4-0 thrashing of Norwich on Saturday.

That brace took Rashford's tally for the Premier League season to 14, with Leicester striker Jamie Vardy the only player in the division to have found the back of the net more often this term.

Maguire first crossed paths with Rashford on international duty, and the defender still recalls being impressed by his ability in training.

And Maguire has tipped his team-mate to continue his rise in the years to come.

"I'm pleased for him this year that he is starting to get the goals he deserves, and hopefully he has not stopped yet," Maguire told reporters after triumph over Norwich. "He has a few more in the tank from now until the end of the season.

"I can remember one of the first sessions when I went to train with England, he really stood out to me there - his ability on the ball, his technique. He has everything to go and have a career at the highest level."

United remain five points behind Chelsea in the race for fourth spot, with Frank Lampard's side running out 3-0 winners against Burnley on Saturday.

And Maguire believes his team can still qualify for the Champions League if they are more consistent week to week.

""We have played two good games and one bad game, and it has not been good enough in terms of that," he added.

"If we put a few wins together on the bounce, we will have every chance."

United host Wolves in an FA Cup third-round replay on Wednesday, before travelling to Anfield to face Liverpool this weekend.