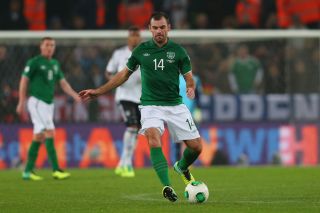 Gibson sustained a knee injury in the first half of the Republic of Ireland's FIFA World Cup qualifying 3-1 win over Kazakhstan, but scans on Wednesday revealed that, although he had ruptured his anterior cruciate ligament (ACL), the overall structure of the joint was unaffected.

And Martinez is looking forward to welcoming the 25-year-old midfielder back as soon as possible.

"Obviously it was a real disappointment on Tuesday, as you can imagine," said Martinez.

"I was watching the game and straight away you could see it was an innocuous challenge, and that normally is when you pick up injuries.

"He has the ACL damage, but the whole structure of the knee is perfectly fine, and it’s going to be a straightforward surgery. From that point of view, I’m looking forward to see Darron back, hopefully this season.

"That, in a way, was real good positive news, taking into consideration what it could have been.

"It's really disappointing to lose Darron for whatever space of time, but we’re all very positive that whenever he comes back he'll come back stronger.

"We're going to use this period to get him working on other aspects of his fitness and making sure that his knee is going to be perfectly repaired and ready for whenever he's back.

"You don't want to lose players. In pre-season he was magnificent, but it's not good to look back. We're just looking forward and we want to see Darron fit as soon as we can."

The Everton manager also reserved special praise for Leighton Baines following his performance in England's 2-0 win over Poland on Tuesday, a result that clinched a World Cup place for Roy Hodgson's men.

"I thought the game against Poland, he was really, really influential," he said. "I thought he enjoyed his football and showed just where he is in his career.

"From our point of view, Leighton Baines' performance is something that we see week in, week out, and it's great to see that he can take that into his international duty. It shows you the maturity and how ready he is to perform in that manner.

"When I see Leighton performing on the pitch, I think he brings a complete package. You don't see players that can give you that quality in the final third and in the same manner has got that assurance and decision-making in his defensive duties."