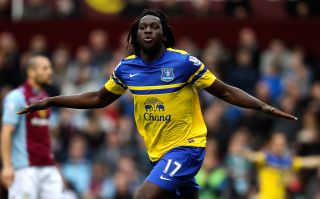 Lukaku - who joined Everton on a season-long loan deal from Chelsea - has made a bright start to life on Merseyside, scoring five goals in his six appearances for the club.

Martinez has challenged the Belgian forward to be more involved in games, for a longer period of time, and the Spaniard is impressed with the early signs.

"I do feel he is getting stronger for longer in games and remember, Rom (Romelu) plays with real power and that's the way he should be playing every time he's on the pitch," Martinez told EvertonTV.

"It was positive for him to finish the whole game against (Aston) Villa. Now he must try to carry on working hard and make sure that his strength and power can be there to help the team for the full duration of the game.

"Rom had a very important role (against Villa) and he took to it with real maturity and great responsibility and was very significant in us keeping a clean sheet in the game."

Lukaku will be hoping to play another 90 minutes when Everton play host to Tottenham on Sunday.