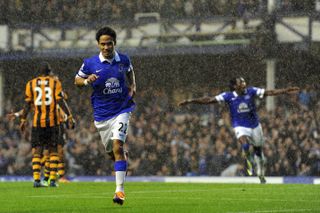 Former Tottenham man Pienaar struck just 10 seconds after coming on to give the home side a 2-1 victory at Goodison Park.

Kevin Mirallas put Everton in front and Yannick Sagbo equalised on the half-hour mark, before South African Pienaar scored the winner on his return from injury.

Martinez said: "Steven Pienaar brings something really special to our team. The way he works with Leighton Baines and the way he can find space.

"It was key for him to be fully fit, we knew he couldn’t play the 90 minutes but the impact he had on the game was terrific. It was very important for us to have that little bit of magic to get that second goal."

Arouna Kone could have put the icing on the cake for the hosts when he struck the post, but Martinez was still able to reflect on a job well done.

He added: "It was a professional win,  very satisfying. I was really worried before the game, it was a tricky fixture as we had so many players representing their nations that we only had a couple of days to prepare for the game and that’s always a really difficult factor.

"I thought we started the game very well, the first 10-12 minutes we started with a tempo and with the quality we wanted. After scoring the first goal it became a scrappy affair and obviously Hull City are a team that will always put you under threat.

"I thought (in) the second half we controlled the game much better, we kept a very good clean sheet and then we got the goal that we needed.

"The third goal would have been a terrific moment for Arouna Kone with the way he’s been working behind the scenes. He deserved that finish, hitting the post made it a more anxious finish than it should have been."

Barry was shown a yellow card as a result of the challenge, having also been involved in a tackle with Danny Graham that resulted in the striker being replaced due to a knee injury.

But Martinez said: "I think there were a few challenges due to the conditions, it was a wet pitch and the rain made it even quicker and there was a couple of challenges.

"There was one on Phil Jagielka in the second half, but I thought the referee understood the conditions to assess the challenges. I think Gareth gets the ball and then he slips away.

"I thought the referee was right to give a yellow card, bearing in mind that was the decision he gave for other challenges in the game."