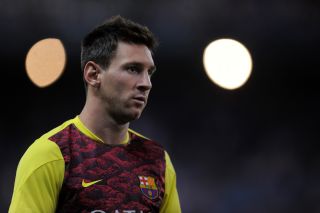 The 26-year-old forward was withdrawn at half-time in the first leg of the Supercopa de Espana against Atletico Madrid on Wednesday due to a thigh problem.

Barcelona confirmed on Friday that they were monitoring their star man's fitness ahead of their second La Liga fixture of the season at La Romaleda.

And Martino has now revealed Messi is not available, although he insisted he does not expect the Argentina captain to be out for long.

"We're very optimistic about Messi, he's just out as a precaution, we don't want to take risks, certainly not at the start of the season," he said.

"Should people worry about Messi's injuries? I see him every day and I'm not worried. He started the season well, this is bad luck.

"A game without Messi is different, but it can't be an excuse. We have many good players, we should adapt and play a good game."

Martino also stated that Messi being out does not automatically mean that €57 million close-season signing Neymar will make his first competitive start for the club, but admitted this could be the case.

"We'll see (if Neymar starts), we need to go step by step, but he's doing better every day, he is getting to know his team-mates and the club better."

The Argentine boss was also asked about Gareth Bale's prospective world-record transfer to Real Madrid, and revealed he is uneasy with the Welshman's reported €100million price tag.

"Bale is an excellent player but the rumoured fee shows a lack of respect for the world we live in,” he added.