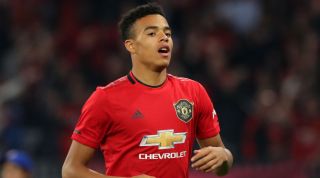 Manchester United are preparing to face Astana on Thursday evening in their first Europa League clash of the season.

Youngster Greenwood is set to make his full debut having impressed in pre-season.

Ahead of the clash at Old Trafford, Solskjaer has been full of praise for the 17-year-old.

"When you have got strikers who can score goals they should never lose the hunger or the appetite," he said at his pre-match press conference (via Goal).

"Mason [Greenwood] is one of the best finishers I’ve seen, and I’ve played with quite few decent ones.

"Just work hard," Solskjaer said of his advice to the teenager. "There are so many years ahead of you. The next game is always the most important one.

"[His finishing] seems natural, but it never is. It is repetition, it is being [in the right place] and knowing how to hit a ball. Every situation you are in he does [well]. His technique is brilliant. [Greenwood] is better than me now, that’s for sure!"

Eric Garcia: who is the 18-year-old about to step in at centre-back for Manchester City?