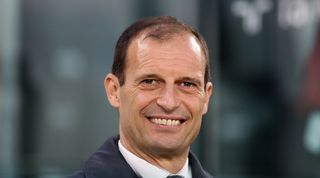 Allegri is taking a year out from football after leaving the managerial post at Juventus last summer.

The Italian won five Serie A titles during his time in Turin, and guided the Old Lady to two Champions League finals.

According to The Sun, Allegri would put himself forward for the Spurs job if Mauricio Pochettino leaves.

There are thought to be growing fears that Pochettino could be readying himself for a new challenge after five years in north London.

There have been a couple of public discords between Pochettino and the Spurs hierarchy, mainly to do with transfers, that have hinted all is not well.

The Argentine has led Spurs to a Champions League final, and has made them a mainstay in the competition.

Pochettino signed a new deal with Spurs at the start of last season, and chairman Daniel Levy is reportedly holding out hope of him staying.

However, if he were to leave, Allegri is believed to head the list of potential replacements which also includes Leicester City manager Brendan Rodgers.

Adel Taarabt exclusive: Luka Modric told me I'd play for Real Madrid or Barcelona one day