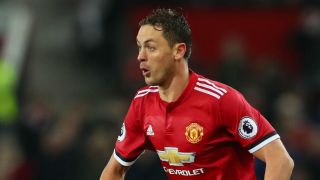 Midfielder Nemanja Matic is confident Manchester United can do "big things" despite the Premier League title looking beyond them this season.

That gap can be trimmed to 13 with victory at Old Trafford on the same day City face Arsenal in the EFL Cup final.

United are still in contention in the Champions League, though Jose Mourinho's men were fortunate to escape their away last-16 first-leg clash against Sevilla with a 0-0 draw, and are in the quarter-finals of the FA Cup.

And Matic has plenty of hope of a successful conclusion to the campaign, the Serbia international telling United Review: "I think that we have improved.

"Of course, in the Premier League, it is difficult to win every game, but I think step by step we have improved and in the future I believe, as a team, we can do big things together.

"I'm happy to be with the team and how we are working together. I'm sure we can do something this season and in the future for sure.

"We have to be honest and say we have had some very good games, but we have also had some bad games. We have to improve together. We have the Champions League and the FA Cup still to play for.

"To win the league is going to be very hard as we know because the gap is very big, but we have to fight until the end and we will see what we can do."