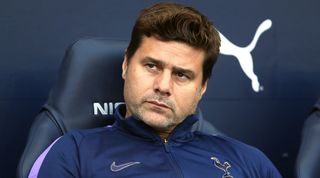 The Argentine was fired by the Premier League side earlier this week after five-and-a-half years at the club, to be replaced by Jose Mourinho.

He led Spurs to the Champions League final last season, but was given his marching orders after a dismal start to the new campaign left his side languishing in 14th place in the Premier League.

According to Sky in Germany,Bayern Munich are considering a move for Pochettinio as they continue their search for a permanent head coach.

Niko Kovac was sacked earlier this season, and Hansi Flick has taken the reins in Bavaria on an interim basis.

The Bundesliga champions are yet to make contact with Pochettino, but he is thought to be one of the leading candidates for the role.

Spurs will pay Pochettino £12.5 million of compensation in instalments, but those payments would cease if he finds a new employer during the three to six-month period of notice.

Ajax boss Erik ten Hag, PSG coach Thomas Tuchel and former RB Leipzig manager Ralf Rangnick have been linked with the vacancy at Bayern recently, but have all distanced themselves from the speculation.

Sky Sports News believe that Bayern could face competition from Real Madrid for the Argentine’s services, with the Spanish giants viewing the 47-year-old as a potential option to take over next summer.

Interim boss Flick got off to a superb start by guiding his side to a 4-0 thrashing of Borussia Dortmund before the international break, and he has the trust of the club hierarchy.

His next job will be to cut the four-point gap separating the Bavarians from league leaders Borussia Monchengladbach.

Bayern return to Bundesliga action with a trip to Fortuna Dusseldorf on Saturday.

QUIZ! Can you name the 40 most successful Premier League managers by win percentage?

ANALYSIS Why Trent Alexander-Arnold means so much to Liverpool fans