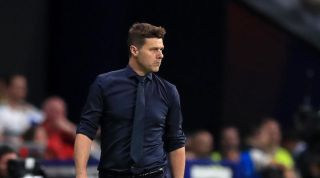 Mauricio Pochettino says Tottenham should be judged differently to their big-six rivals because they lack the same financial muscle.

Spurs broke their transfer record in acquiring Tanguy Ndombele for £55m this summer.

Pochettino also brought Giovani Lo Celso and Ryan Sessegnon to the club, but Spurs have still spent less than each of Manchester City, Liverpool, Manchester United, Chelsea and Arsenal in recent years.

And the Tottenham boss says his side should not be considered in the same bracket as the likes of Arsenal because of a significant bank debt which limits their spending power in the transfer market.

“Arsenal, in the last two years, signed [Pierre-Emerick] Aubameyang, the best striker in Germany; [Alexandre] Lacazette, the best striker in France and, one year after, [Nicolas] Pepe,” Pochettino said. “If you see us in five years… now our main striker is Harry Kane but our second specific striker is 17 years old, Troy Parrott. That is the difference in the projects.

“I don’t want to say one is wrong and another is good. It’s only that the way we operate is completely different and, afterwards, we need to compete. Mercedes compete with Ferrari, McLaren, Red Bull. After, we compete in the same race and, if you judge, the judgments need not only to be on the race but the whole process. That is why sometimes it’s fair and sometimes it’s not fair.

“We all cry [about the £600m debt]. Do people need to remember that number? Yes. Different clubs ask the bank for £600m to invest in the team, like Barcelona or different clubs. They create a debt by signing players; putting the debt on the pitch, trying to win.

“We are different. We need to create a legacy for the future. In this period, we are suffering the restrictions but it’s normal. We need to work hard to find a way to compete in this very tough league – in a different way to our rivals.”

Tottenham will be looking to bounce back from last weekend's defeat by Newcastle when they take on rivals Arsenal on Sunday.